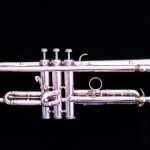 A lot has happened since the last episode dd ddd dddd dddd Turn it OFF, Kevin nnn nnnn CLICK! Thank you.

I had the first of 2 Christmas concerts last Thursday, at a large church in the area. It was over an hour of solid playing; something I hadn’t done in probably 40 years. Yes, I felt it, and the lips were simply shot. I’m still using the generic 3C mouthpiece with the silver Olds Ambassador trumpet.

The Yamaha 14B4 mouthpiece that I ordered finally arrived, just in time for the 2nd concert at the city building. It did have the more comfortable rim like the Yamaha 11 I had, and a visual inspection and sticking my thumb in the cup verified that the cup was similar in feel to the 3C. The (pardon the improper terminology, trumpet purists, because I have no idea what the “proper” name for this part is) “air hole” (bore, stroke, compression, intake manifold????) is ever so slightly bigger than the generic 3C I have. I had the same endurance as before, and the lower register didn’t suffer. I rarely get to the top of the staff, and hardly ever above anyway. My range is something I’m going to work on, though, as it needs to be wider.

The second concert also featured the community choir singing along with us for several numbers. That was very enjoyable. My endurance was better at this shorter concert.

For me, the 2015 season is over. The band has one more concert this Sunday everning, but I am not going to be able to make it, due to church. We have a band banquet next week, and then there’s a break until January.

I did begin working on the tuning slide removal for the other Ambassador trumpet I have. First, I tried just valve oil, on the off chance it would do something. Nope. So this week, it’s on to the WD-40. If that doesn’t work, I have some JB Blaster stuff that I’ll try next. The trumpet is in really good condition, considering its age (made in the mid 70s). There are a few dents in the 2nd and 3rd valve tubing, but they should not affect playing. I do eventually want to do a comparison between my silver trumpet and this one. There are times when playing the silver horn that it seems like there is a restriction in the sound output. Maybe one of my valve guides is worn, and the valve is turning?

The York National trumpet is on its way to its new owner, as is the tenor horn, the frumpet, and the tenor trombone. I didn’t make quite as much as I had hoped for, but that’s the way it goes sometimes. I now have a bunch of room in my closet for more horns… er… my shoes and laundry basket.